The Unexpected Charisma of the Rural Midwest

From the East to the West coast, from the Southern States to the North, NOAPS artist members bring landscapes to life through their paintings. Iowa artist, Laura Larabee brings us the rural Midwest.

Raised on a farm overlooking the Mississippi River, Laura gathers inspiration from her surroundings. She is always prepared carrying her camera and her sketch book for the sudden times when something in the landscape catches her eyes. And, one day, something caught her eyes inspiring her to create a very unique painting: “Broken Back”.

Laura explains the details: “In Iowa, where I live and paint, people are very connected to the changing seasons and landscape. As an artist, I especially take an interest in the small variables of my rural landscape. And, in this rural landscape of the Midwest, it is not unusual to see old houses which were used as schools up into the 40s. Many of them were later converted into private homes as the districts built larger schools. In the scene of “Broken Back”, I had passed this school house countless times and since it was not really very interesting, it failed to grab my attention as a potential work of art.  I watched the house every time and it always projected an ordinary and unexciting view.

Suddenly, one morning after a thunderstorm, as I was passing by the familiar sight, the image struck me. The old house had collapsed as if the weight of the stories of the past was too heavy to carry on its back. What a way to fall! It didn’t just blow over, instead its front fell down, and the main spine of the building broke leaving the back and its perky bell tower still trying hard to stand tall. The fog and the red sumac added to the piteous look of the building, Now, it was time to paint! I took a whole bunch of photos, gave a little sketch, and left the place to its fate”.

“Broken Back” is painted like most of her paintings. It started with a detailed and to-scale drawing to work the composition, and then the painting was created from the drawing. Laura applies the paint very thin, building up layers and glazes. Usually a piece is painted at least four times over before the right color is achieved. Soft brushes and linear lines help her build a texture that is hard and smooth at the same time.
One of the unique aspects of Laura’s paintings is her preference for wood mahogany veneer panels also known as Innerglow panels. While the canvas is the most popular painting surface of our time, wood panels have been used since the beginning of painting.  The old Masters used wood panels: poplar, oak, cedar, birch and even pine. As a matter of fact, poplar was used for the famous Mona Lisa by Leonardo da Vinci. Of course, not every piece of wood will work. It must be properly aired, seasoned, aged, cut, and primed to avoid warping, shrinking and toxic vapors. Laura’s mahogany wood panels follow these requisites and they are primed with a nice grey pre-ground to make her art one of a kind. 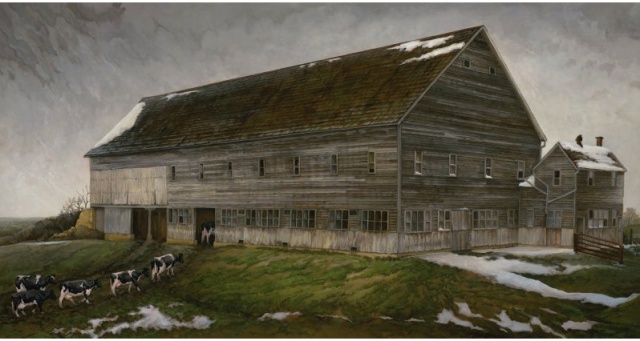 Laura Larabee is a Signature Artist for the National Oil & Acrylic Painters’ Society. She completed a double major Bachelors in both fine art and teaching at Cornell College in Iowa, with later courses at Wayne State in Nebraska. She has also taken workshops by nationally known artists. She has won many awards including the Rising Star of Galaxy Award at the National Oil and Acrylic Painter’s Society Exhibit, and The Artist’s Magazine Award of Merit at the Oil Painters of America National Exhibit, as well as many regional awards at art fairs. Some of her paintings have been purchased by the Cedar Rapids Museum of Art.

More information about Laura at: http://www.lauralarabee.com