Joseph Sundwall: Getting to the Heart of It

Joseph Sundwall, whose painting “Eyes Right! I said Right!” was the winner of the “Most Original Award” sponsored by Southwest Art Magazine at the NOAPS 2016 Best of America Exhibit, is but one example of a talented painter whose work crosses multiple genres.

Joseph Sundwall was raised in a suburb of Chicago at a time when the arts were an integral part of a child’s education.  Encouraged by family and art educators he found his art path early on, and completed his first oil painting in third grade.

When it came time for college he chose the Kansas City Art Institute, where he majored in graphic design after the first year of foundational studies.  Key elements of the program focused on color theory, composition, photography, typography, printing and development of negative space.  The minimalist approach aimed at clear and simple execution and stressed problem solving relevant to the objective of the work.

After college, Joseph moved to New York City, and worked for several years as a graphic designer and type designer, returning as well to studying oil painting at the Arts Students League, the National Academy of Design, and St. Oswald’s Studios in London.

Joseph has studied with some prominent teachers, including David Leffel, Ron Scherr, Everett Kinstler, and Charles Hardaker.  Because of his innate curiosity about the process of painting and his design background, he is always aware of the “big picture”; how the central focus of the painting relates to the whole, and the intention of the painting. 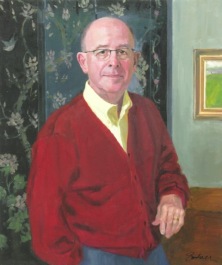 The subject of equestrian and animal painting began for him after watching a polo match, and he has since included equestrian events and  all kinds of animals in his work.  The human face and figure have also been integrated into his work: “I feel that I was somehow destined to paint the figure-humans and animals in motion and at rest”.

Today, Joseph divides his time between figure painting and landscape, which usually includes animals and birds in particular.  The artist prefers to paint from life, using simple oil sketches as reference material over photographs (though photographs become a necessity when painting fidgety children and animal subjects).

His painting style relies on wet-into-wet techniques, plus the juxtaposition of areas of flat paint with modeling and vigorous brushwork playing off areas of studied strokes.

“I’m a realist painter,” Joseph says, “but more than just making things look ‘real’, I’m interested in putting down no more than is necessary to get a point across…to discover what can be left out or merely implied; this requires more conscious involvement in the process of painting for me, and invites greater participation by the viewer”. This is the heart of it!

The inspiration for “Eyes Right! I Said Right!” was a group of hounds waiting in the kennel to perform in competitive regional trials in Aldie, Virginia.  Sundwall finds this breed to be particularly “comical, childlike and a little confused, always bumping into each other and making us smile at their antics.”

For Joseph, a usual day in the studio consists of taking a few quiet moments to gather his thoughts about his paintings in progress.  This helps him to clarify what needs to be done next for his paintings, and takes the pressure off for completing a painting before the final touches are determined.

The deepest joy for Joseph is that moment when a viewer can connect deeply with one of his paintings; “for when the heart opens all barriers are dissolved, and there are no longer two of us, but we are one.  Art can do that, and that’s the real beauty of art…it reminds us of our essence”.

Joseph has taught oil painting privately and at regional art associations in New Jersey and New York, and regularly demonstrates the art of portrait painting before arts associations.  He currently lives in Montgomery, NY, and enjoys painting en plein air in the celebrated Hudson Valley.  Joseph is represented by J.M. Stringer Gallery in Vero Beach, FL. and Portraits North in Lexington, MA.

Visit his website at: http://www.SundwallArt.com, and his blog at: http://sundwallart.wordpress.com

To see more of the paintings included in the 2016 “Best of America” exhibition, visit http://www.noaps.org/exhibitions.