Joseph Orr: Artist with a Vision

Posted on November 8, 2017 by noapsociety 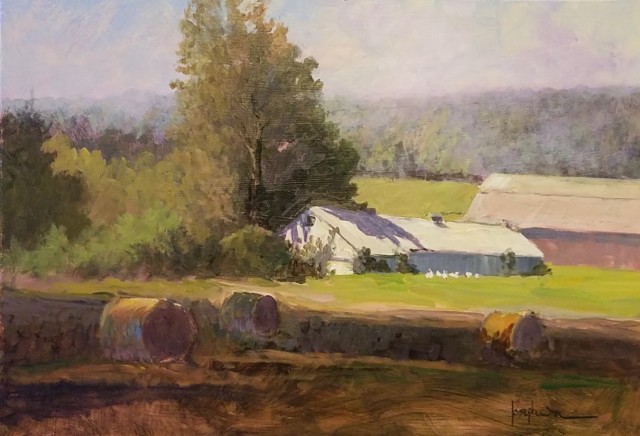 This serene scene of an American Farm was painted by Joseph Orr at the recent opening weekend of the Best Of America Exhibit at the Castle Gallery in Fort Wayne, Indiana.  Joseph, in his unassuming and humble way, began and completed this painting during the roughly two-hour demo.  He began with a watercolor pencil sketch, and then deftly worked in his first layer, confidently continuing with layers to the finish.  Joseph is not only a skilled and impressive artist, he is an open and generous individual with his knowledge and kindness.  All who attended the demonstration were touched and inspired by him.

Over a 43 year career as an artist, Joseph has accomplished a great deal.  Aside from his ability to make a living at his art, Joseph and his wife Rita, also an accomplished artist, were two of the founders of our organization.  This group of six artists recognized the need for an outlet for artists working in oil and acrylic to exhibit their work, and the National Oil & Acrylic Painters’ Society was born.

Joseph is mainly a self-taught artist; he began working as a machine operator in major greeting card company during a break from college as a young man, and was inspired by all the art he saw.  He enrolled in college art courses, but found he had a different vision and so began private lessons with artist Tony Allison.  The lessons were short-lived, but Joseph was able to learn the basics of drawing and watercolor painting.

Landscapes are the main genre for Joseph’s paintings; he has been inspired by 19th and early 20th century artists such as Winslow Homer, Alma-Tadema, Edgar Payne, Jack Wilkerson Smith and John Francis Murphy.  Contemporary artists Richard Schmid, Eric Michaels, Eric Sloane and his wife Rita continue to inspire him.

Currently the main medium for Joseph is acrylic, though he does do sketching in watercolor, and occasionally works in pastel or oil.  In the field his palette consists of Cadmium Yellow Light, Ultramarine Blue Cadmium Red Medium, Mars Black and Titanium White.  In the studio he adds Unbleached Titanium, Yellow Oxide, Raw Sienna Burnt Sienna, Burnt Umber, Cadmium Orange, Magenta, Dioxazine Purple, Cobalt Blue, Phthalocyanine Blue, and Viridian Hue Permanent.  He works on cotton or linen canvas or a gessoed masonite panel.  His brush collection consists of brights, flats, rounds, scripts and riggers of no particular brand.

A day in the studio starts with a self-critique of the previous days’ work.  If starting a new painting, he studies his field sketches and photos to ascertain his composition and the all important mood of the painting.  He blocks in the dark colors first, working throughout the painting, in order to “see the direction of light on the canvas.”  He continues working darks and lights until the painting is finished. 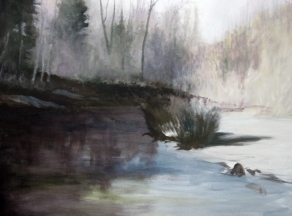 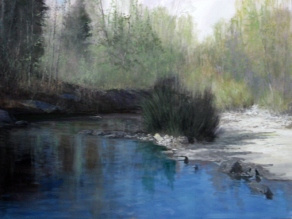 Painting process for “An Audience with Nature”

For all of us artists, Joseph’s contribution to the art world has been significant.  Along with his wife and fellow artists, he has given so many of us the opportunity to exhibit, learn and grow as artists through the National Oil & Acrylic Painters’ Society.  We can’t thank him enough.

His closing words for us as artists: “Keep painting, painting and more painting.  No matter what is popular, keep to your beliefs and values.  The world will eventually come around to what you are doing”